It never ceases to amaze me some of the things that people who work in marketing say to me.

I was talking recently to a marketer when she said that she and the team used ad-blockers, but at the same time she pays for advertising.  The reason why she paid for advertising, was she could measure it.  Not that it generated any revenue.  She didn't use social, because she said you couldn't measure it.  While in fact you can.

It's like the sales leader who berates his sales team for not making enough cold calls, but won't take cold calls himself as he doesn't' like being disturbed.

The fact of the matter is that we all know that marketing has changed.  Mobile, internet and social media have changed it.  We know it, the employees know it and the management know it.

At the dPulse conference last week in Zurich, I was told that marketers are scared and sit in a bunker terrified.

Why?  Because it means they need to tell people what they are spending money on right now does not work and they have to make a switch to something that does work.

So they bury themselves in articles about email titles, facebook ads, or the shinny new object of the week, hoping and praying that this will be the silver bullet they have looked for.  They hope that nobody will wake up and ask them to justify that they are pouring money down the drain all to create nothing.

We know the world has changed, we know that our prospects are reading content and are active on social media.  But are we actually so terrified to divert the budget away from the dying campaigns that no longer work to the the world of social.

(We are typically creating 30% uplift in incremental sales and shorting the sales cycle by 40%.)

Sales people should get one additional meeting per week.

The real challenge is that everything Tom listed in his strip is, indeed, what we now consider the responsibility — officially or unofficially — of marketing leadership: Grow the business Make customers happy Deliver amazing experiences Achieve commercial success (revenue and profit) Define and protect the brand Seriously, that’s a jaw-dropping range of capabilities and responsibilities. 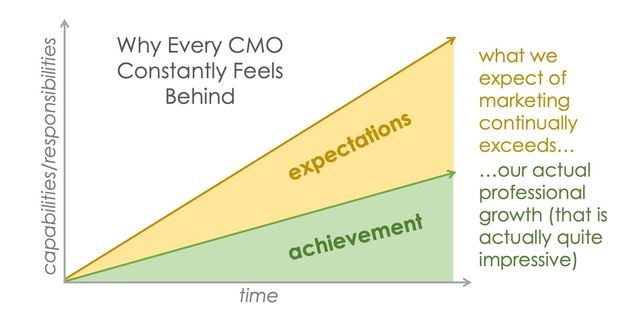