I live 30 minutes drive from Heathrow airport in London.  A few years ago, there was an idea to add a third runway.

This would increase the airplane traffic in the skies above our house.

You can imagine that local residents were not happy and they put together arguments about air pollution, noise pollution and all of these were dismissed.

Because the authorities had a chart about air traffic with an arrow that went up.  The forecast was that people travelling by air would increase and increase.

How could we argue against a chart with an arrow that goes up.  How stupid were we, of course air travel would increase, forever.  Heathrow HAD to be a hub or it would be overtaken by Frankfurt, which would cost jobs.

Even Greta Thunberg arguments didn't seem to help us.

I decided to come up with a plan, something that nobody had thought of.  Something I deeply believed in.

Sometimes you have to dream big

So I submitted a proposal that we should scrap the 3rd runway and give everybody a free PC, Mac or iPad, free access to the internet and a zoom licence.

It was so outlandish, I didn't really tell anybody.

A friend of mine even said "let me get this right, so what you are saying is, that people will stay at home and use the internet and use zoom calls rather than travelling?  Yeah right, like that will ever happen!"

What Has This Got to Do with Martech?

A friend of mine recently wrote to me and asked my opinion on the two companies he was about to invest in, this was my response.

"The “problem” that company A and company B have, as do 95% of companies today is that they think they need to position their company as “buy my products because they are great”.

This is fundamentally flawed because everybody, including their competitors, say exactly the same.

As a buyer, I know nothing about what company A and company B and what they sell, but how do I make a choice when all the information is about the products and all the products sound the same?

You may say that these companies don’t have competitors but I can show you companies that look and sound the same.  Your buyer is just like me, knows nothing about these companies and so they look like everybody else and it all becomes a blur.

The second issue they have is that the world is online.  As soon as you put those products in front of me, I, as buyers do, start searching for products that are similar.

Anything a company does, advertising, cold calling, email marketing, brochures, will trigger the buyer to search for alternatives online.

If I tell you the BMW 4 Series is the best car in the world, you will go online and give me a list of cars that are similar or even better.  All without BMW or a salesperson knowing you have done it.

The companies that will win in this pandemic are those that realise they need to cut the corporate rubbish and build relationships and have conversations.  Know me, like me, trust me.  People buy from people they know and trust.

Last November, a BMW dealer in the UK had 28 pieces of inbound to buy a BMW car, they converted 14 of those into sales.  14 sales x 50,000 Euro = 700,000 Euros additional revenue for zero marketing spend.  This was the same month that their competitor, Jaguar Land Rover complained they were not selling cars and were therefore stopping production.  Though they blamed it on Brexit, which didn't seem to bother BMW..

There are clear winners and losers starting to happen in the social space.  BMW is a “considered purchase” just like company A and company B.

Martech is Part of the Problem

Martech and adtech is all about taking 1930s and 1990s technology and making it faster.  Marketing automation is all about sending me unwanted emails as fast as you can send them.  Or as fast as I can unsubscribe or create rules so these emails go straight to the bin without hitting my inbox.

The world is on social.  We are all on-line so companies that keep sending emails and making cold calls are already sounding old fashioned.  Add to this the number of cancellations of martech subscriptions and you will see more and more Martech mergers and acquisitions (M&A) as martech founders decide to bail out and take the money.

Maybe your thinking "let me get this right, so what you are saying is, that people will stay on social and see all of these email and cold call interruptions as a nuisance. And the winners will be companies that build relationship son social.  Yeah right, like that will ever happen!" 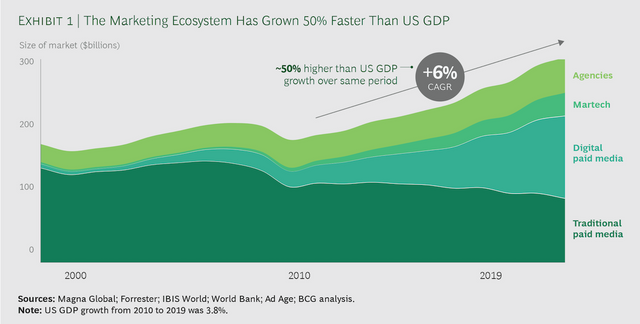