Interesting article that does not really promote the need for advertising.  After all, the great blessing of digital is that you can measure it.

"Marketers say they face a key measurement dilemma with programmatic advertising: Their bosses want a clear sense of how media is performing, but it's often difficult to report ROI with accuracy.

The report from MediaMath and Forrester Research was based on data from a survey conducted in May 2020 among 221 US marketing decision-makers who influence or direct their firm's digital media buying strategy.

Some 94% of respondents say executives at their firm scrutinize how digital media spend is performing.

However, only one-third of marketers say their organization can demonstrate and report the ROI of programmatic media spend with complete accuracy"

What ROI Would You Expect From Digital Advertising?

This week I had a fascinating conversation with a Martin Lucas on my podcast and the following figures are engagement rates for digital advertising.

0.35% Programmatic (this is where ads follow you around when you browse)

What Does Gartner Say About Marketing and Digital?

Interesting article by Gartner, here are some of the highlights

"Over the next five years, an even greater rise in digital interactions between buyers and suppliers will break traditional sales models."

"The Gartner Future of Sales 2025 report predicts that by 2025, 80% of B2B sales interactions between suppliers and buyers will occur in digital channels. Chief sales officers (CSOs) and other senior sales leaders must accept that buying preferences have permanently changed and, as a result, so too will the role of sellers." 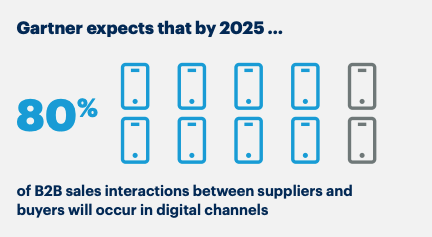 "Sales organizations must be able to sell to customers everywhere the customer expects to engage, interact and transact with suppliers"

"Gartner defines the future of sales as the permanent transformation of organizations’ sales strategies, processes and allocation of resources, moving from a seller-centric to a buyer-centric orientation and shifting from analog sales processes to ....  digital-first engagement with customers." 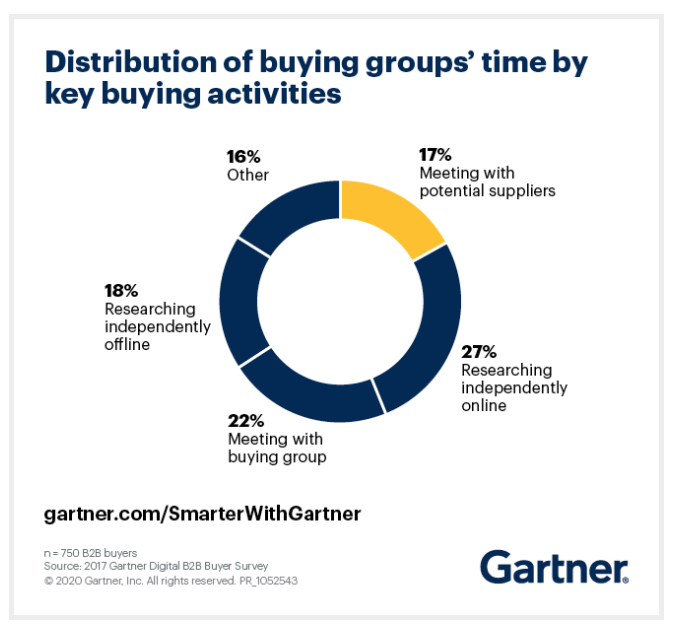 "Gartner research shows buyers typically only spend 17% of their time meeting with potential suppliers when considering a purchase. With less and less customer face time, virtual selling via digital channels will predominate."

If digital marketing isn't getting the returns it once did and the customer has shifted to digital, what is the CMO to do?

It's time to admit that the Interruption methods of the past, advertising, cold calling and email marketing results are getting less and less.

This is where we need to get brave.  We admit that, and realise it's time to jump to something else.

What is that something else?

Businesses Are Switching to Social Media

"More than 4 billion people around the world now use social media each month, and an average of nearly 2 million new users are joining them every day."

"The world is spending more time on social media too, with the typical user now spending roughly 15 percent of their waking life using social platforms." 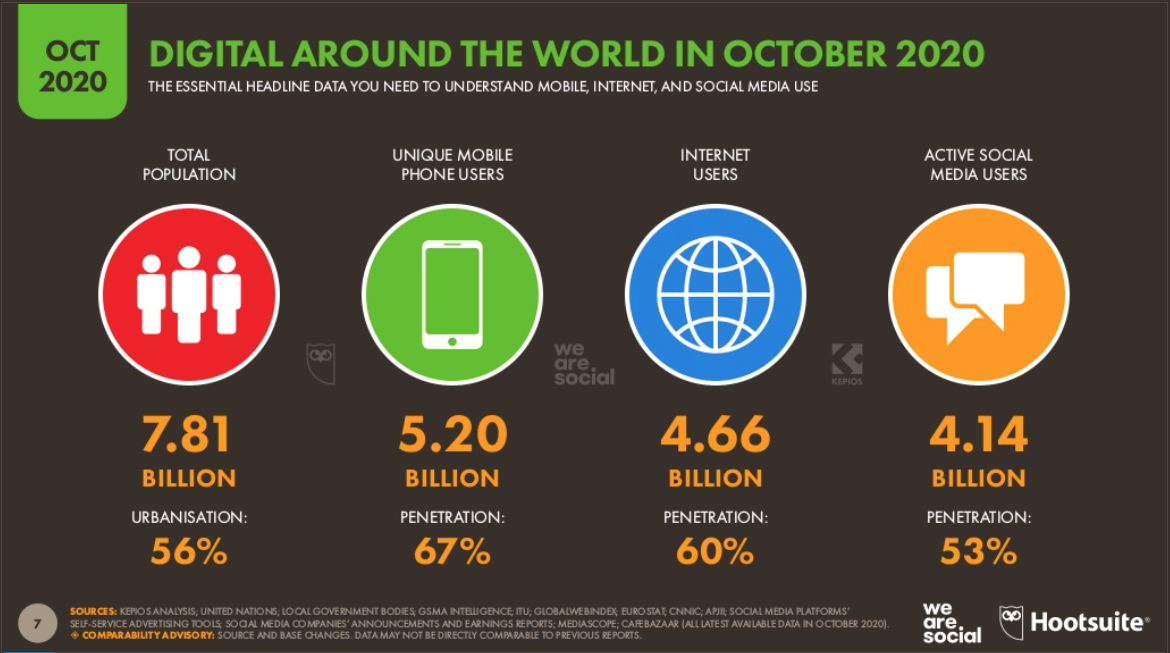 Drilling down in the last quarters report, Simon says and this is the important part for CMOs.

My advice would be to think less about populating a content calendar, and focus more on identifying and initiating the conversations that matter most to you and the audiences that you care about."

The reason why digital marketing, email marketing and cold calling no longer works is that it's based on interruption and people are fed up of it.  What creates meetings is conversations and the only thing you have as a CMO right now, with all of your customer online and on social to create conversations .... is social.

Traditional marketing is, you pay for ads to create awareness, you probably have some "hero content" on your website, that you drive people to.  To get the content they have to give you emails, you build an email list, which you send newsletters to.

In the past, you had conferences, where you would collect business cards, which gave you emails.

Either way, there is some sort of "awareness", you collect emails and you run nurture campaigns.  In marketing terminology, this is impressions, engagement and clicks.  Let’s explore them in more detail.

Impressions - On Linkedin, if I scroll through my timeline and your advert is seen on my timeline then that is an “impression”.

Engagement is where you might “hover” over the ad, or dwell, this is engagement.

Clicks are were you might click on an ad, there will be some sort of call to action (CTA) at which point you are probably harvesting emails and adding a name to a database.

How To Get Impressions, Engagement and Clicks Using Earned media

They have "great profiles" what I mean by that is they are approachable, like a buyer might want to talk to them.

They build a network.  Currently most people on Linkedin if you analyzed their network, it would be built from x colleagues and recruitment consultants.  This isn't really much help when you need to try and spread your message into target accounts, prospects and customers.  I'm talking here about proactively connecting with people in your target accounts, in your prospects and in your customers.

The old way of collecting emails and nurturing them is based on chance and as we see from the figures from Hubspot a lot of it is based on Hope. We all know hope isn't a strategy.

Form a connection on Linkedin and you have direct access to these people (prospects, customers etc,) by sharing content, you are able to "nurture" the contacts, not on an interrupt basis, but on a permission basis.  My advice is that the content is insightful and educational.  Material that people will want to read, material that people would read if they were doing research to buy, what you sell.

Bonus Tip: When you contact with people on social, you can even try and open up a conversation, but let's not get ahead of ourselves.

Here is an example, Mark Woodhams, a Senior Sales VP from Blackline thought he knew all about social and was blown away - see this post.

Another example is James Stirk, he wrote an article about how he thought he knew all there was to know about social and how wrong he was.

And Catherine Coale, wrote about how Telstra Purple was transforming to being a "social" business.  A social business, not being a non-for-profit, but being a business that uses social strategically, rather than tactically.

But Time It Will All Work Out In the End!

Digital transformation has absolutely accelerated during the pandemic.  EY forecasts that 72% of CEOs will prioritize investments in digital once we start to get back to some semblance of business as usual. This will underpin new business in the "new normal" I would argue that it's time to make the leap, sooner than later.

We meet so many companies that are saying "we are promoting posts, we are cold calling, it will work out in the end".  I'm really sorry to say, it won't.

If you are like me, and you think the world has changed and maybe you should try something new .... and are brave enough, then we should have a chat.

Marketers say they face a key measurement dilemma with programmatic advertising: Their bosses want a clear sense of how media is performing, but it's often difficult to report ROI with accuracy. The report from MediaMath and Forrester Research was based on data from a survey conducted in May 2020 among 221 US marketing decision-makers who influence or direct their firm's digital media buying strategy. Some 94% of respondents say executives at their firm scrutinize how digital media spend is performing. However, only one-third of marketers say their organization can demonstrate and report the ROI of programmatic media spend with complete accuracy: 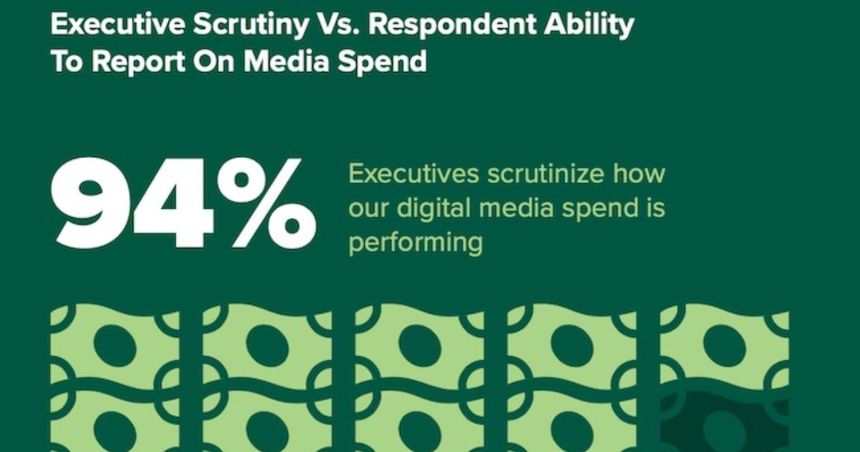