Ad Tech is currently made up of over 7k+ different companies, all of them are involved in the digital ad buying eco-system, this is a system that allows brands and marketing companies to bid in real time to get their intrusive message in front of you and me, time, after intrusive time.

When 'programmatic' as its known was launched it was seen by ad agencies and marketeers as the panacea of volume, low cost marketing.

The system that without a doubt works in favour of the ad tech platforms doesn't really service the needs of its ad clients, and has led to pissing us off that much we are now installing ad blockers at lightening speed on every device possible.

This is because the industry is riddled with ad fraud, current forecast are conservatively aimed at a loss of over $100 Billion by 2023, which in plain language means that for every dollar spent circa 50c+ is going to fraudsters, throw into that the ongoing rise of ad blockers, our ability to skip ads, and the demise of creativity in ad land then it's only a matter of time when the house of cards that is ad agency, and ad tech land will collapse in on itself.

The most of the rise in ad fraud has already started to come via our internet connected 'Smart TV's' and the ad tech guys are savouring every minute of it.

Now don't get me wrong, I haven't always had a downer on advertising, over the years I've spent quite a lot, and all without really understanding the disruptive ripples that are constantly reducing any ROI from ad land.

A report from Dr.  Augustine Fou (link below) suggest;

Marketers Should Run Their Own #TurnOffAdtech Experiments

Even if you, the marketer, doesn't buy the existence of ad fraud or think that it is under control already, consider the portion of your dollar that goes to what is known as the "adtech tax." Multiple studies over the years from different organizations have shown that 40, 50, 60, 70 percent of your dollar gets extracted from the supply chain by adtech companies (for their own profit); that means only a small portion of your dollar goes towards "working media" - i.e. placing the ads on the publishers' sites. Wouldn't it be far more cost effective if you purchased ads directly from the publisher (that has real human audiences) rather than buy massive quantities of ad impressions on long tail sites you've never heard of or visited?

How about revisiting some of the thinking that went behind many of those great ads from yesteryear, the creative was pretty awesome because the really good ones did something we can all relate to, they told a story, which is something that now sadly lacking in this machine gun, shoot them out fast mentality of ad tech.

Content Discovery via Social Media is one of the ways you can open up new conversations, find groups of 'real' people who are genuinely interested in you, your brand, your employees, and your company.

To do this requires a radical rethink about how you utilise social media, and this rethink requires you to reduce your 'advertise and promote' thinking, and start to think about being social, which is really about listening, joining in, and creating conversations. And if done right, the people who really can add value to you will find you.

It will also save you from paying that 'Bad Tech Tax'.

Run your own #TurnOffAdtech experiment -- literally turn off your digital media for 1 day, 1 week, or 1 month. And see if there is ANY change to your business outcomes -- yes, your actual business outcomes, not some vanity metrics like amount of impressions, clicks, or traffic. If there is no change after 1 day of turning off adtech, then turn it off for another day, another week, etc. 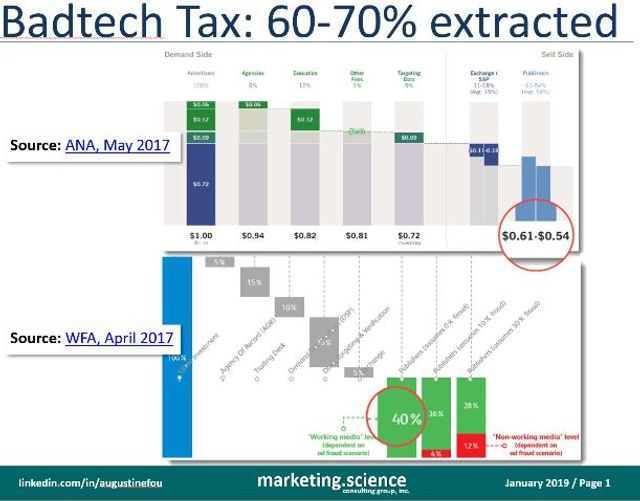