Hubspot has just announced .... that now you can get more adverts to ignore!

It's funny that on this announcement the only people cheering are people who sell more advertising, none of us poor buyers who are having their lives blighted with interruptions are cheering.

Google ads are not social they are advertising.

Linkedin ads are not social they are advertising.

Think of a football game, it has adverts around the pitch.  Thinking that advertising is social, is like saying the fact you have a billboard around the pitch you are a player in one of the teams, you are not.

I spoke at a recent Martech conference and at the start of the conference I asked everybody to stand up.  Then sit down if you can remember the last 3 ads you saw.  Nobody sat down.

Advertising was started in the 1930s, it was easy, a uninformed audience you could interrupt them, now, buyers are informed and advertisements have become noise we filter out.  2 billion people (yes Billion) people use ad-blockers and this is growing at 30% year-on-year.  Adidas at the last Football world cup didn't use advertising as they know that their demographic use ad-blockers.  Proctor and Gamble reduce their advertising budget and sales went up.  There could be a pattern forming here ...

HubSpot announced today that LinkedIn ads are now available in the Professional and Enterprise tiers of Marketing Hub as part of the HubSpot Ads tool. HubSpot Ads also includes integrations with Facebook and Google, giving customers the tools they need to manage all of their advertising efforts right inside of the HubSpot platform. “LinkedIn is the world’s largest professional network, so it was important to make its advertising tools available to our customers,” said Nicholas Holland, GM and VP of HubSpot Marketing Hub. “HubSpot Ads provides a suite of tools that our customers can use to generate new leads and nurture them into loyal customers, all while gathering insights to make sure they’re spending their time and money wisely. By adding LinkedIn ads to the platform, we’re giving businesses one more option to level-up their advertising strategy and grow better.” 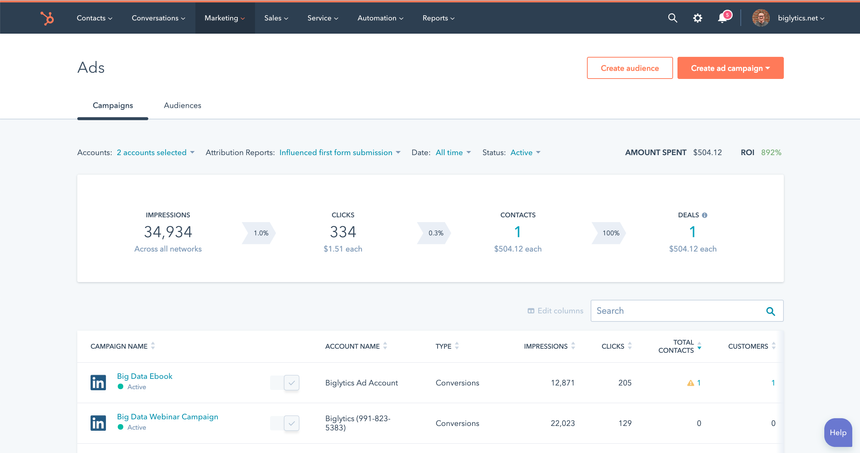