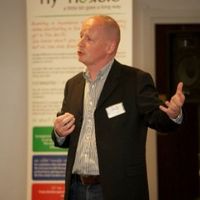 At DLAignite, we believe that social media should be part of every organisation’s strategy rather than just a tactic in a few departments.

You might think that sounds like a big “ask” for our clients, but we don’t think it is for two reasons:

First, the effect of social media is obvious to us all everything from kids walking around with their noses glued to their phones to middle aged people researching things on the train to whole elections being influenced.

Second, many of the people we talk to are changemakers. They want to be the ones leading new initiatives, initiatives that leave a permanent and profound change on their organisation.

We see this as a massive opportunity for both the business and the changemaker. Unlike many other transformational initiatives a “social media transformation” not only educates and changes individual’s behaviour it EMPOWERS them too.

The knock-on effect is simply amazing because they feel happier, they are more productive and they have a more positive feel towards the organisation, which they then, inevitably, share with their networks - clients, prospects, friends and family, and this gives the organisation a huge voice and therefore a competitive advantage.

That’s the upside of moving social media in to a strategic place. There is little downside however to doing it but a huge risk in not doing so because forces outside our control are at work - Facebook approaches 3bn subscribers, Linkedin 700m, Instagram 1bn, Twitter 500m - these are your (and my) customers whether we like it or not and to not be where our customers are is not a good thing.

Social media has changed the world, and you must change too.

Insanity Is Doing the Same Thing Over and Over Again and Expecting Different Results. Albert Einstein

Shouldn’t the 94% that aren’t clicking ads be the focus of businesses efforts rather than the 6% that are clicking ads?
Adam Gray

What does Seth think about your marketing?
Adam Gray

DLA Predictions for 2019 and beyond.
Adam Gray

The end of YOUR world might be nigh!
Adam Gray
Recent posts from Digital Leadership Associates