A month or so ago I was lucky enough to visit the Kunsthalle in Hamburg, a gallery which includes famous works by Éduard Manet, Wassily Kandinsky and Paul Klee.

It also houses several well-known paintings by Caspar David Friedrich including Seashore by Moonlight and Wanderer Above the Sea of Fog.

We strolled around the gallery, which was largely empty due to the pandemic, enjoying the opportunity to look at a famous portrait without having to wait in line or peer over several pairs of shoulders.

Of course you don’t have to visit a gallery to get a good view of a painting. Amazon Prime is currently home to a series of documentary shorts, called Masterworks, where each episode reviews a famous painting, reveals its origins and throws in some useful biographical context.

For instance, I didn’t know that the young Friedrich survived falling through ice, but that his brother, who jumped in to save him, drowned.

And although I’m wary of the omniscient author theory of art, there’s little doubt this had an influence on his view of nature and almost certainly shaped the menacing landscape of his 1824 painting, The Sea of Ice.

Smartphones, saboteurs and the Saatchi Gallery

The series was originally broadcast in 1988 so the commentary and direction feel dated by today’s cultural norms. The gallery sequences, for example,  look as if they were shot on film, and heavyweight broadcast cameras, certainly not high-resolution video. The editing is pretty static as if we were leafing through a catalogue.

Since then, the way that we experience art has changed dramatically, and well in advance of the pandemic. Even before smartphones gave us split-second access to works of art and their context, there were audio guides and more recently, augmented reality headsets.

But with current restrictions on travel and limits on the number of visitors, galleries are turning to robots in an attempt to claw back revenues – while gaining well-needed PR in the process.

This autumn, the Saatchi Gallery in London is displaying ‘Lobsteropolis’ from the ‘crown prince of Pop Art’, Philip Colbert. As well as an entrance ticket, visitors can also book a robot mounted camera that they control with a smartphone from the comfort of their home.

Colbert stresses that remote viewing is intrinsic to the exhibition which focuses on how we experience life and culture during a lockdown.

He also accepts the risk posed by mischievous remote visitors who turn their remote assistant into a battering ram targeting other robots and valuable exhibits.

Speaking to the London Evening Standard, he says: “Ultimately, if people behave badly, they will be disconnected, a bit like getting escorted out in a normal event."

I don’t know about you, but that feels more like an invitation than a warning. Contemporary art by its very nature is playful and disruptive.

In the past saboteurs have staged a pillow fight on Tracy Emin’s bed, added their signature to a priceless Rothko and poured ink into one of Damian Hirst’s formaldehyde display tanks. How about a robot race around the Saatchi Gallery?

It’s all a long way from the patriarchal commentary describing The Sea of Ice. But that’s probably a good thing. And if we are clasping for silver linings, at least the creative reaction to COVID-19 is making art more accessible in ways that will persist beyond the pandemic. Just look out for impromptu robot wars the next time you’re in south-west London.

Forget the pre-made video footage of former virtual exhibitions – this will be tailored to the individual with automated gallery robots that can zip between the artworks, navigated by yourself and you can linger long as you like, dictated by your interest in the works. ‘E-visitors’ will be able to move about the gallery via their smartphone or computer and zoom into the various details of Colbert’s modern, psychedelic paintings, bronzes and marble pieces. 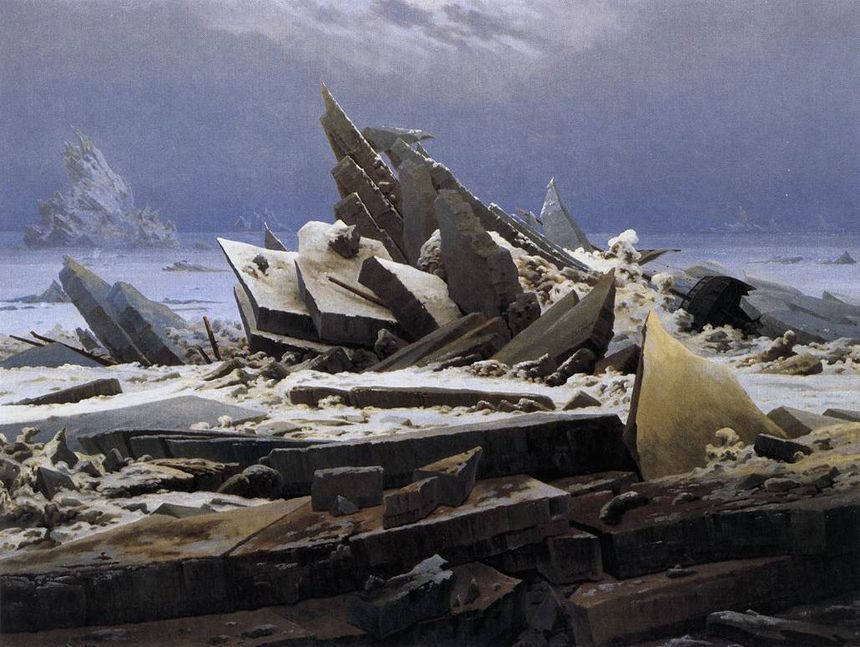